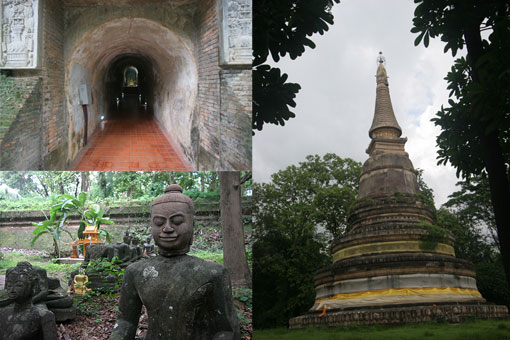 In Tina’s last week in Chiang Mai, we went to Sabai De Ka Thai Massage to do a one day oil massage course with a lovely Thai lady called Kloy. We had a really memorable day and wouldn’t hesitate recommending it to others. You can listen to the podcast we made during the day by clicking the play button below. And yes, I’m shamelessly pimping my oily girlfriend in the picture below :-). 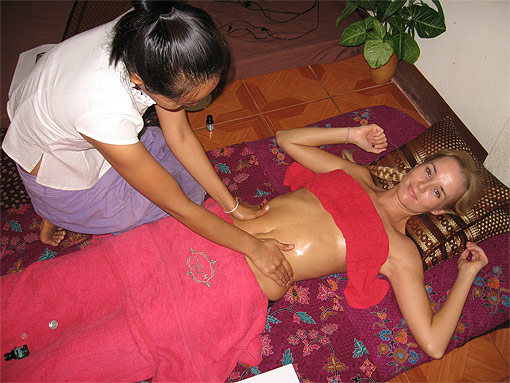 Tina and I have just returned from the meditation retreat organised by the Wat Suan Dok Monk Chat program in Chiang Mai. The retreat groups depart from Wat Suan Dok at about 2pm every Tuesday.

You can listen to the ‘Meditation Podcast’ Tina and I made on the retreat by clicking the play button above. 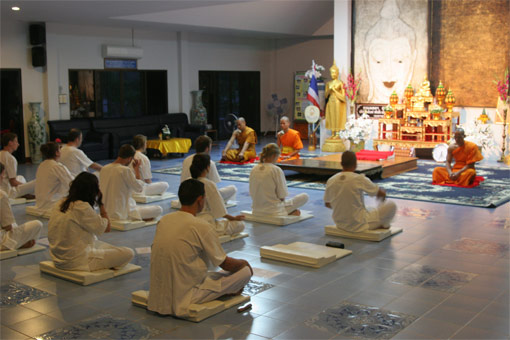 This meditation retreat is intended purely as an introduction to various Buddhist meditation techniques, as well as an overview of Thai Buddhism and culture – and it’s facilitated by the Chiang Mai Campus of the MCU Buddhist University.

Having just returned from our retreat, we’d both thoroughly recommend you do the course during your time in Chiang Mai. Although we have spent several years in Thailand, we still found that we learned a lot from the informative presentations and discussions we had with the monks. Plus we’re feeling pretty chilled out and mindful which is always a bonus.

The Meditation Retreat program is funded purely through donations, and as a guideline we suggest you leave a donation of somewhere between 200THB and 1000THB per day that you attend the program – depending of course on how wealthy/generous you are.

I’ve been putting off writing this post and editing the associated podcast for a while now, because I have such mixed feelings about Pai I simply didn’t know where to begin! You can hear the podcast by clicking the play button above. 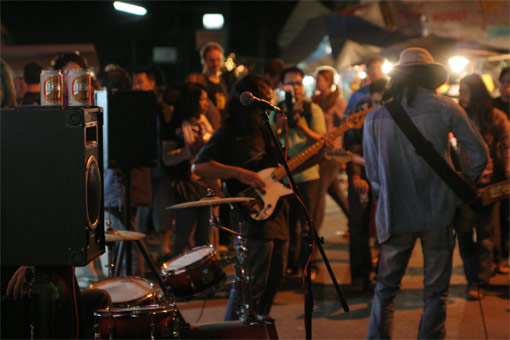 Pai (pronounced ‘Bai’) is a small town in northern Thailand about 140KM north of Chiang Mai on the main Chiang Mai – Mae Hong Son route. Years ago Pai was a quiet market village, mainly inhabited by Shan people, but nowadays it thrives on tourism thanks to its arrival on the ‘backpacker map’ of Northern Thailand. Nowadays both Thai and foreign tourists are making their way to Pai in droves – the numbers of Thai tourists has increased dramatically since 2006 after Pai featured in two popular, Thai-made romantic movies. There are also frequent music festivals held in Pai – including the Pai Reggae Festival that also features briefly on this podcast.

The drive from Chiang Mai to Pai is undoubtedly a very beautiful one, taking you across a stunning mountain range through some very winding roads, until you descend into the picturesque Pai valley. I have driven it four times on my motorbike now and always feel incredibly exhilarated upon arriving in Pai.

The first time I went to Pai with a group of friends, in June 2007 we had a rather negative incident that has perhaps tainted my view of the place. To cut a long story short, a group of six of us were quietly and soberly walking home at about midnight after a late dinner, and a Thai man drove past on his bike – obviously drunk out of his mind, and with his hand permanently on the horn, almost ran us down. He then proceeded to get off his bike, square up to us for a fight, get back on his bike, and then repeatedly try and run us down for the remaining ten minute walk back to our guest house. It was a frightening experience.

To put it into perspective, this kind of aggressive behaviour is almost unheard of in Thailand, and in my two and a half years here, the only other place I can say I have encountered any kind of aggressive vibe has been Koh Phangan. What’s the obvious parallel between these two places? The short answer is that nowadays they are both on the backpacker drink & drugs party circuit, and this has for some reason contributed towards the tension between the locals and foreigners, perhaps through the sheer numbers of inebriated foreigners invading the town.

What’s more, there are some serious questions being asked over the conduct of the Thai police in the Pai area. In January 2008 an off-duty and reportedly very drunk police officer fatally shot Canadian tourist John Leo Del Pinto, and shot and injured a second woman Canadian tourist. Both the foreigners were also reportedly drunk. This particular officer was alleged to have taken his gun out on a number of occasions (whilst off-duty and drinking), and start firing it randomly in the air.

The changing vibe in Pai was summed up very well in an anonymous letter to the Chiang Mai CityLife magazine – some of which is quoted below:

One Saturday in particular remains in my memory, where several police officers decided to inspect a party at a bar in town. I believe that they were looking for drugs. I along with many other tourists was especially shocked to see that one officer was carrying a machine gun…This kind of behaviour is likely to scare tourists and leave very negative impressions on them with regards to Pai town as a holiday destination…The police are also actively confiscating other vehicles, testing individuals at random for drugs and alcohol abuse, detaining owners of restaurants and bars for remaining open past the agreed time, and generally making a lot of noise in a relatively quiet town that did not appear to have many problems beforehand….The increased police presence is clearly visible and does not, in my opinion, make Pai town look like a place one would like to visit. There is also a general feeling of unrest here and I feel that it is quite obvious to the tourist travelling through. The police are unapproachable and menacing. This has a strong negative impact on the atmosphere here in Pai town. The previously friendly and welcoming town appears to have changed into a place where everyone is afraid to even walk down the street in case they are accused of doing something wrong.

I would still recommend visiting Pai, for the drive there, and the beautiful surrounding countryside and villages, but if you’re going there to party, be careful – it seems to have an increasingly lawless underbelly that perhaps most tourists remain oblivious to. I encourage you to read the section on the Wikipedia Pai entry – Controversy over Police Conduct.

For a very comprehensive guide to Pai with some great photos, check out Chris Pirazzi’s ‘All About Pai‘.

Street dogs are probably the most common sight in Thailand (and other developing countries). Whether you travel to Chiang Mai as a tourist or live here, it is impossible to overlook the street dogs.

When I first arrived in Thailand, I was shocked to see so many dogs, some in terrible condition and I always feel really bad when I see them and am not able to help them with more than just a sausage from a near-by seven-eleven.

Karin Hawelka and Amandine Lecesne are two women who refused to ignore the problem. They set up ‘Care for Dogs’ in Chiang Mai. Their aim is to improve the life of street and temple dogs by organising sterilisations, vaccinations, and medical care. They also offer a home for approximately 80 homeless dogs and puppies until they find a new loving home for them.

Above is a video of the amazing dogs they take care off (and that are up for adoption if you offer a loving home). You can also listen to the very interesting interview with the founder of “Care for Dogs” Karin Hawelka if you do to: http://www.earthoria.com/care-for-dogs-shelter-chiang-mai.html

Care for Dogs is an animal welfare organisation based in Chiang Mai, Thailand. Listen to an interview with Karin Hawelka, one of the Care for Dogs founders by clicking the play button above. 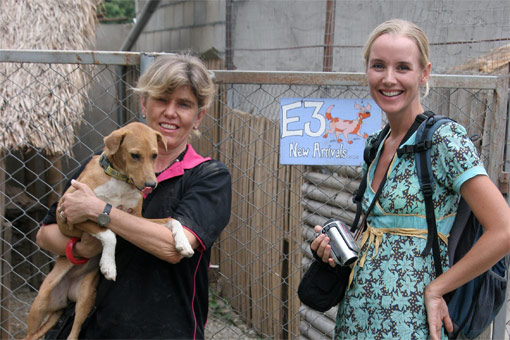 Care for Dogs was set up by Karin and Amandine Lecesne who refused to ignore the problem of dogs suffering in the streets of Chiang Mai. Their aim is to improve the life of street and temple dogs by organising sterilisations, vaccinations, and medical care. They also offer a home for approximately 80 homeless dogs and puppies until they find a new loving home for them.