Here’s a photo of a very bald but rather sweet Peruvian hairless dog looking a bit sleepy at Huaca Arco Iris temple, in Trujillo, Northern Peru. 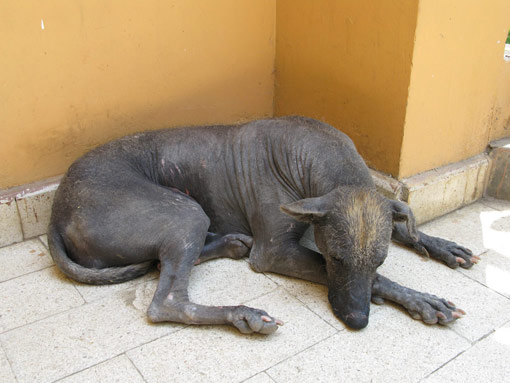 This is an ancient breed. Although it is often perceived to be an Incan dog because it is known to have been kept during the Inca Empire, they were also kept as pets in pre-Inca cultures from the Peruvian coastal zone. Ceramic hairless dogs from the ChimÃº, Moche, and Vicus culture are well known. Depictions of Peruvian hairless dogs appear around 750 A.D. on Moche ceramic vessels and continue in later Andean ceramic traditions.

Read more about the Peruvian Hairless dog on Wikipedia

Street dogs are probably the most common sight in Thailand (and other developing countries). Whether you travel to Chiang Mai as a tourist or live here, it is impossible to overlook the street dogs.

When I first arrived in Thailand, I was shocked to see so many dogs, some in terrible condition and I always feel really bad when I see them and am not able to help them with more than just a sausage from a near-by seven-eleven.

Karin Hawelka and Amandine Lecesne are two women who refused to ignore the problem. They set up ‘Care for Dogs’ in Chiang Mai. Their aim is to improve the life of street and temple dogs by organising sterilisations, vaccinations, and medical care. They also offer a home for approximately 80 homeless dogs and puppies until they find a new loving home for them.

Above is a video of the amazing dogs they take care off (and that are up for adoption if you offer a loving home). You can also listen to the very interesting interview with the founder of “Care for Dogs” Karin Hawelka if you do to: http://www.earthoria.com/care-for-dogs-shelter-chiang-mai.html

This video shows you the amazing Wat Umong temple in Chiang Mai.

Scenery: Peaceful land with lots of trees and shade on a hot day. You can feed the fish, turtles, and ducks in a large pond. The Wat is famous for its ancient tunnels and large stupa. Other attractions include a Buddha field of broken sculptures, a fasting Bodhisattva, a spiritual theatre of paintings, reproductions of ancient Buddhist sculptures from India, and a library-museum.

History: The monastery at Wat Umong is one of the oldest in Chiang Mai, dating back to 1300 A.D. The fable goes that a king built the brick-lined tunnels for an eccentric monk named Thera Jan. Once upon a time there were paintings decorated on the wall which dated back to about 1380. You can enter the tunnels to see the small shrines inside (a flashlight is useful). The adjoining stupa was constructed about 1520 over an earlier stupa (1400-1550). The monastery was eventually abandoned, though Japanese troops were said to have a stronghold here during World War 2. Since 1948, the Thai prince Jao Chun Sirorot has been active in rebuilding and reestablishing the monastery. In 1949 he invited Buddhadasa Bhikkhu (founder of Suan Mokkh in southern Thailand) to come and live in the monastery. Obligations kept Buddhadasa Bhikkhu from coming and instead he sent Ajahn Pannananda and other monks to help set up and run Wat Umong.

Getting there: Wat Umong is located 3.5 km west of Chiang Mai. From Suandok Gate (the West gate of the old city) you drive up Suthep road (approximately 2, 5 km West) and cross Canal road. About half a kilometer after Canal road, there is a sign on your left hand side which leads you to Wat Umong. From here follow the signs south 1 km to the Wat. The easiest way is by tuk-tuk, scooter or bicycle.