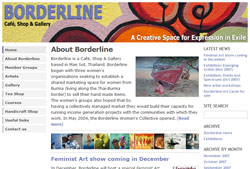 I have recently been building a new website for an organisation called Borderline, based in Mae Sot, Thailand. The project comprises two stages, a main website, and a shop. You can view the main website by clicking here.

Borderline is a CafÃ©, Shop & Gallery based in Mae Sot, Thailand. It began with three women’s organisations seeking to establish a shared marketing space for women from Burma (living along the Thai-Burma border) to sell their hand made items. The women’s groups also hoped that by having a collectively managed market they would build their capacity for running income generation projects with the communities with which they work. In May 2004, the Borderline Women’s Collective opened.

The first thing you need when setting up a website is actually a name. Ideally, the name should cover the content of the website so that it gives the reader an idea what the website is all about. Thomas and I had the idea of starting a website focusing on a healthy lifestyle in a healthy world….in short about fair trade, healthy products, and healthy activities for the body and the mind.

This doesn’t mean that we never have a drink and always drive on a push bike. It means that the lifestyle that we live is somewhat alternative (off the beaten stressful life most people our age live), and we try to care and consider for people and animals in all our doings and for the earth.

So in inventing a website name we thought about a name including something about fair trade such as tradejustice.com or goodtrade.com but decided that in terms of shifts in the paradigms used globally it will be a bad idea to include the name “fair trade”.

As an example I can give “development”- it used to be a word with many positive connotations -namely a kind of saving the “3. world”. Today it is considered by many as a term covering the industralized countries attempt to colonize (once again) and control the developing countries. So much for picking a popular term – be aware of that.

So instead Thomas and I both searched for names containing the word “earth”, ecology, health, organic etc. Thomas came up with the name econate but when I proposed the name Earthoria he agreed to it. I like the name because it is earth and euphoria combined.