Last night I was hungrily making some raisin toast and the toaster made a huge flash and bang. This brings my tally of things that have been destroyed by the Thai electricity system to four. These are: 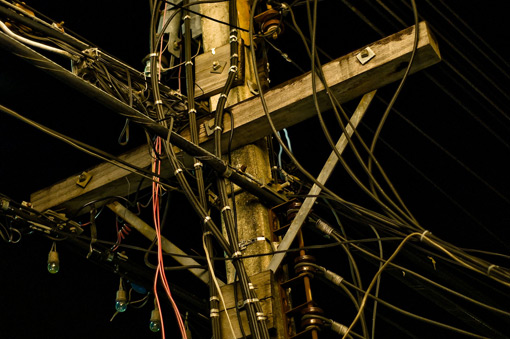 Especially during the rainy season, you regularly witness bright blue flashes and hear ear-splitting bangs from the electricity wires in the street. The Thais refer to this as “Electric City” problems – but just accept the on-and-off, surging nature of their power supply as all part of daily life, which in fact it is.

My external hard drive was first to go. One day it just didn’t start again. Following this came the Ipod charger. I was sitting in my apartment at the time, and suddenly the lights shone as brightly as the sun, and the fan whizzed around as if it had been turned up to the equivalent of 10 (it only has three speeds – 1-3). Soon I heard a crackling sound coming from the corner of the room, and saw smoke and sparks coming out of my Ipod charger. It was obviously history – toasted.

A couple of weeks ago I moved into a new office space, and within a week my new surge protector power board had just stopped working – taken out by an over-night surge.

This brings me up to last night, and the sad demise of my little green toaster. What will be next?

[Thanks to Alexander Cole for the photo]