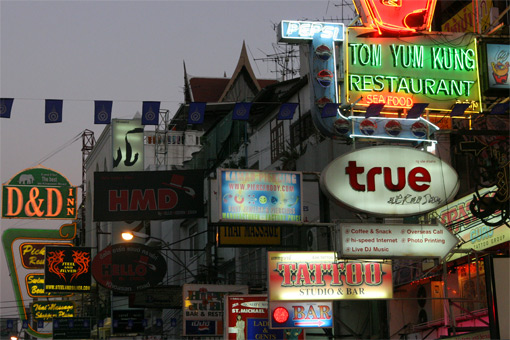 Thai people are generally exceptionally friendly, accepting, smiley and non-aggressive. They also go out of their way for foreigners on a regular basis, and generally accept our regularly idiotic behaviour with little more than a smirk.

The food here is cheap, tasty, varied, and comparatively very healthy. You can eat a delicious local meal for little more than $1 /50p. The range of cheap fruit deserves its own mention – wow!

Warm & sunny with a few months of warm & wet. You normally get about a 6 month stretch of continuously blue skies in the dry season. Perfect for the avoidance of cold, dark, miserable, drizzly and generally pants weather like I experienced in London for 12 years.

As the Thais do, you can get in any vehicle without any idea how to control it, and hit the road. Cool for hiring things and “learning as you go along”. The maximum fine you face for any kind of ‘driving error’ (lack of license, helmet, or know-how etc.) is usually about £3/$6.

The predominant religion is Buddhism, simply the coolest ‘mass religion’ in existence. This obviously influences the general ambiance of living here and also makes you think briefly before killing mosquitoes/ants and other biting insects.

There are hundreds of these dotted all over Thailand, and they are wonderful places to spend a day and/or night.

As we all know, Thailand has some of the most stunning islands and beaches in the world. Wherever you live in Thailand you’re not that far from a decent beach and the costs of internal flights are coming down thanks to the likes of Air Asia.

8. The cost of living

You can live like a king here and still spend about a quarter of what you’d spend in London eating baked beans and living in a dump.

This has been put in a separate category not because I consider Thai women to be inhuman – as Tina has suggested below, but merely because it was the first thing mentioned when I questioned a few male friends in Thailand. I should add that I am happily married and do not look at, or think about Thai women myself.

What have I missed out? If you’ve visited Thailand or you live here, please feel free to suggest something YOU love about it by submitting a comment below!