Doi Suthep mountain itself reaches an altitude of 1,676 meters (5,498 feet) and Wat Phra That Doi Suthep stands on the flank of the mountain at an elevation of 1,056 meters (3464 feet). Because of this, it’s always pleasantly cool with some amazing views of Chiang Mai city. 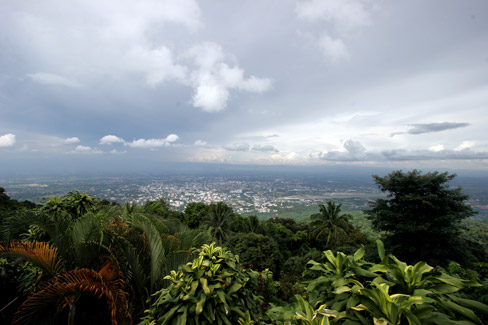 This photo was taken from Wat Phra That Doi Suthep in the late afternoon. What a view!

According to legend, a Buddha relic magically replicated itself just before it was about to be enshrined in the big chedi at Wat Suan Dok. The “cloned” relic was placed on the back of a sacred white elephant, which was allowed to roam whereever it wanted.

The elephant eventually climbed to the top of Suthep Mountain, trumpeted three times, turned around three times, knelt down and died. This was taken as a sign that this was the spot where the relic wanted to be, so King Ku Na built the original chedi on Doi Suthep at the end of 14th century.

Unless you are extremely fit, we wouldn’t recommend cycling. It has nearly been the end of me twice now – needless to say, I didn’t make it. Either get a Songthaew (one of the red pick-ups with bench seats in the back) all the way from the Chiang Mai old town, or get a Tuk Tuk to Chiang Mai zoo at the bottom of the hill and transfer to another Songthaew. It’s also a pleasant ride from town on a moped or motorbike if you are confident riding on windy mountain roads with psycho Songthaew drivers trying to run you off the road.