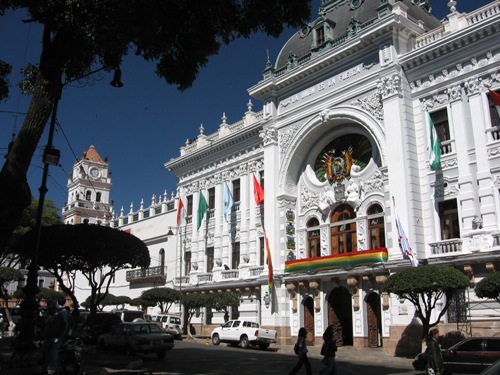 Quito is possibly the most beautiful capital in South America. Spread across a spectacular Andean valley with volcanic peaks in the background, Quito’s setting alone is enough to leave you speechless. The old town is a UNESCO World Heritage site since 1978 and is incredibly beautiful. All the churches and colonial buildings have been restored and is in use which makes the city come alive with the vibrant working class and indigenous character that has always defined it. Walking its narrow streets is to wander into another world. The old time is also the best place to find a guesthouse. It is both the cheatpest and safest place to stay in Quito (if you can call Quito safe :-/)

Merely a 20-minute walk from the old town, Quito’s ‘new town’ is a different world; a mixture of hotels, high-rises and government complexes. Many travelers head to Mariscal Sucre, which has trendy cafés, international restaurants, travel agencies, cybercafés, bars and small hotels. The area’s nickname is gringolandia (gringo land), but quiteños (people from Quito) like it too. It is, however, a lot more dangerous to walk here after dark than in the old part – so be aware.

The video above shows you a little bit of Quito’s splendor.

On November 3rd, 2007, we went to the second International hill tribe concert to advocate for recognition of legal status and the prevention of HIV/AIDS, human trafficking, and drug abuse. The concert attracted more than 20 popular hill tribe singers, from seven ethnic groups, who led the show with songs, entertainment and messages delivered in Karen, Hmong, Mien, Akha, Lisu, Tai Yai and Lahu languages. The show took place at Chiang Mai University.

Three years ago, Thailand’s first International Hill tribe Pop Concert, organized by UNESCO and Radio Thailand Chiang Mai, shook the mountains around Chiang Mai with a crowd of 4,000 stomping, dancing, jumping and singing fans. "The first concert was a major success – both as entertainment and in bringing attention to the issues facing hill tribe people ," said Dr. David A. Feingold, head of the United Nations Educational Scientific and Cultural Organization (UNESCO) Trafficking and HIV/AIDS Project and one of the event’s co-organizers. This year’s event was a bit smaller, mostly due to the weather conditions of rain which changed the location of the event in the last minute (probably with the result that many people couldn’t find it or stayed home due to the rain).

One of the main purposes of the concert was also to help educate lowland Thai people to think of the hill tribe people as citizens of the country and not simply a tourist attraction. Organized in honor of H.M. the King of Thailand’s 80th Birthday, the concert was furthermore an opportunity for highlanders to express their gratitude to King Bhumipol for his work in improving the livelihood and welfare of mountain people.

The concert, which was free of charge, was very well presented and we enjoyed the performance very much. If you get the chance to go next time the event takes place, do go – it supports a great cause and is very enjoyable at the same time.