Taking the bus from La Paz to Rurrenabaque is NOT for the faint-hearted. The majority of travellers who take the bus there – decides to fly back. The picture above might explain to you why that is.

The journey takes about 18 hours and the first 4-5 hours are done on a very small dirt road onto which only one normal vehicle fits. However, buses drive there all the time and it gets really “funny” when these buses meet a truck or another bus and have to pass each other.

On the picture you can see how much space there is…well hardly enough for ONE vehicle. Then imagine two next to each other and a mountain drop on the outside of about 300 meters. That’s the reality.

On top of that you drive at night. I am a believer in destiny – so I just went to sleep. But the girls I travelled with didn’t close an eye and perhaps with good reason. The passengers on the other bus driving down there at the same time as ours, was woken up at 2am with their bus hanging over the edge of the mountain. They had to get out and pull. Needless to say that they couldn’t sleep the rest of that night.

This video shows the amazing Doi Inthanon National Park and the spectacular views from the summit. Enjoy.

Thomas wrote a brilliant article about Doi Inthanon National Park & Mountain after we visited the place with my family and you can read it here.

Due to its elevation, Doi Inthanon offers a wide variety of ecological habitats, and is therefore home to a significant amount of plant and animal species. There are supposed to be nearly 400 bird species (the highest number of any national park in Thailand), black bears, and various different monkey species. 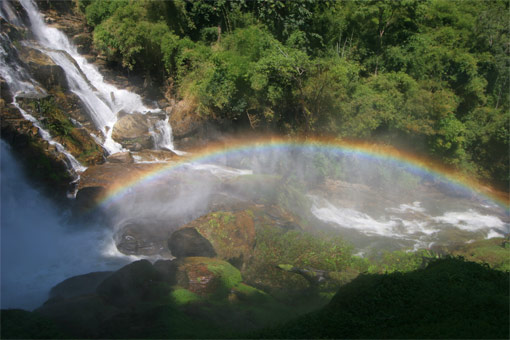 On the lower slopes of Doi Inthanon, near the Karen hill tribe village of Ban Sop Had, are the Vachiratharn waterfalls (named after the Thai Prince), where the river Vachiratharn tumbles over a granite escarpment. We were treated to an amazing view when we arrived here as the water vapour caused by the water cascading over the rocks had formed a striking rainbow – see the photo above.

It was rather cool at the summit (13 degrees C), and there isn’t a notable view from the summit itself, but there are a couple of interesting walks you can do, including the Ang Ka nature trail walk. ‘Ang Ka’ means Crow’s Pond in Thai, and it is considered the highest natural water catchment in Thailand. These walks are particularly interesting as the trees are covered in hanging moss and lichen giving them a unique character.

On the way down the mountain, we stopped at the two Chedis built in honour of the King and Queen of Thailand. It was from here that we got the best views of the surrounding countryside (see photo).

A few friends of ours have previously visited Doi Inthanon from Chiang Mai, and they had told us that they saw relatively little from the summit, as for much of the year the mountain is shrouded in mist. We may have been lucky – or it could have been due the time of year (November) – but the weather and views were superb, helping to make it a really memorable day trip. Highly recommended but check the weather first!

Doi Inthanon is located about 2 and a half hours’ drive South-West of Chiang Mai. Head down highway 108 towards Chom Thong then follow the signs to Doi Inthanon. Foreigners pay 400THB entry to the national park, and residents/Thai people pay 40THB. It is possible to stay the night in cabins at Doi Inthanon National Park – more information on the park and accommodation can be found on the National Park, Wildlife and Plant Conservation department website.