Yesterday I finally entered Peru at the inland La Tina – MacarÃ¡ border crossing. The drive took 9 hours from Loja in Ecuador to Piura in Peru, and passed through some stunning Andean scenery, before descending into the hot and dusty lowlands of Northern Peru. The temperature difference was quite a shock after a month at 2,000 metres or more in the mountains. 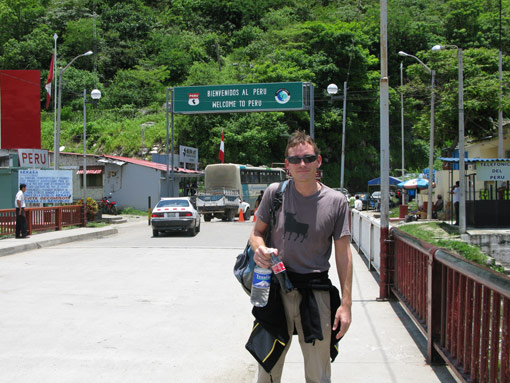 This photo shows me in ‘no man’s land’, on the bridge entering Peru with La Tina in the background.

I’ve crossed a lot of land borders before in Asia and out here, but this was easily the most relaxed out of all of them. A gentle stroll across the river, no queues to get the entry stamps, and the solitary Ecuadorian border guard even shared some of his sugar cane with me to chew on as I walked across into Peru.

I’ll be visiting some of the less famous but equally important archaeological sites in Northern Peru over the next couple of weeks, before making my way to Lima and onto the main Gringo trail towards Macchu Picchu and Lake Titicaca. 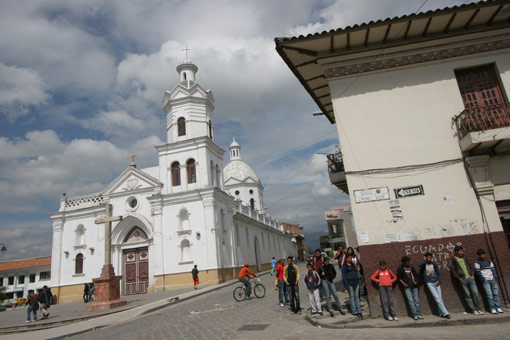 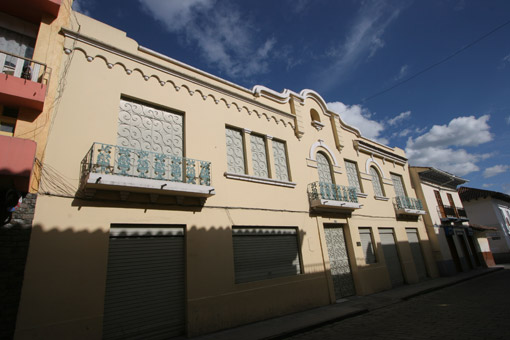 The train ride down the Nariz del Diablo (Devil’s nose) is a tourist trap. Honestly – only tourist will pay 10 $ for a 45 min tourist train ride from Alausi to the Devil’s nose. And then having to pay an extra 2 $ to sit on the roof.

The so-called devil’s nose looks nothing like a nose. It’s just a mountain and not a big one. All the tourists on the train were disappointed. The view that you see from the train i beautiful – but nothing in comparison to the views you see when taking a regular bus in the South of Colombia.

The five hour train ride to Sibamba starts in Riobamba and stops in Alausi just before passing down the Nariz del Diablo. From Sibamba, the train immediately makes a return trip to Riobamba, stopping again in Alausi. Most people get on and off in Alausi.

The train departs on Wednesday, Friday and Sunday at 7am from Riobamba. The tickets can be bought the day before – but as I said – I don’t recommend anyone doing this ride unless they have huge amounts of time and money and nothing better to do.

Cuenca is a beautiful colonial city in Ecuador. Although not as grand as Quito, it has another advantage – it is a lot safer and that makes it as charming as Quito. With its narrow cobblestone streets and whitewashed red-tiled buildings, its beautiful plazas and churches, and its setting next to the Rio Tomebamba it makes a definite worth-while visit.

This video shows you the charm of Ecuador’s third largest city.

The first bus broke down after 2-3 hours, and we ended up sitting beside the road for about an hour and a half waiting for a replacement. On the second bus I ended up in the seat at the back by the toilet, inhaling the acrid smell of piss.

There’s no doubt about it, this was a journey from hell. My first seating companion was a local woman with a baby that screamed hysterically non-stop for two hours. She tried to stop the baby screaming by shaking it, which of course had the opposite effect. She was replaced by a woman with her (approximately) 9 year old daughter sprawling on her lap, which ended up being on my lap too. The daughter then started vomiting in a bag, and continued vomiting for quite some time, whilst lying all over me.

We stopped for lunch at 3pm, I had got up shortly before 6am and missed breakfast, so I was starving. The man in the roadside restaurant had no change for my $5 note, so I was forced to skip lunch too.

I arrived in Quito 13 hours later, having eaten one bag of potato crisps all day, and then discovered the following morning that my small backpack, which had been carefully sandwiched between my legs for the whole journey, had a neat 15cm razor slash in it. My plastic wallet (hidden in a back compartment of the bag) containing $1300 in travellers cheques and $100 in cash was missing.

All I can think is that I fell asleep for a while, and the sprawling 9 year old took it. BUT I am totally amazed that anyone managed to enter my bag, with it sitting between my legs (whilst ignoring my laptop, two cameras and MP3 player) and go straight for the hidden compartment and extract the bag without me noticing.

The Police lady informed me that I am the 10th tourist in the last two months to have been robbed on the Quito – Cuenca bus, whether that’s cause for alarm or not I don’t know…?