It’s about 15 years and two months since I left Lake Atitlan for the first time. In those years I’ve never forgotten it. Think Lord of the Rings combined with Nordic myth or Loch Ness and you may start to fathom the mystical atmosphere this volcano-fringed lake exudes. 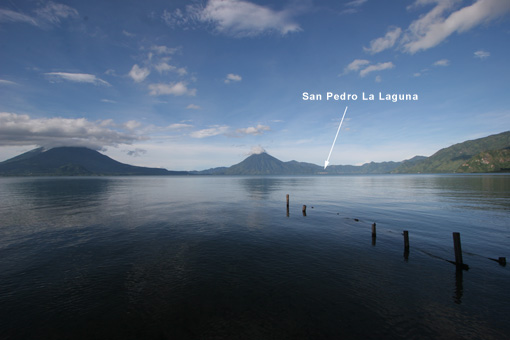 There’s also a darker side, a side to which I think most travelers are oblivious. When I arrived here with three friends in 1993, we were dropped off in a small village to one side of the lake. The occupants seemed to retreat into doorways, staring at us from the shadows. Were we really so frightening a sight that people felt the need to hide from us? A year or so later, I discovered to my amazement that the village we had arrived in had shortly before been subjected to a brutal massacre at the hands of the Guatemalan government during a bout of civil war suppression.

Nowadays Lake Atitlan functions as a traveler Mecca on many levels – hippies, language students, party animals, or people attracted simply by its aesthetics – all congregate here and meditate, study, appreciate the view and frequently lose themselves in the freely available drugs.

We’ll be studying Spanish here (in San Pedro La Laguna) over the next few weeks during which time we’ll also be publishing regular updates about our experiences on Earthoria.com.

View our photos of arriving in Lake Atitlan, Guatemala here.