Denmark has recently emerged as the world’s happiest country, beating out Bhutan, the long-time favorite of anthropologists everywhere. 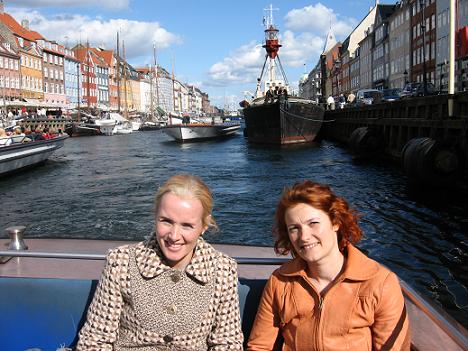 The birthplace of LEGO"”a contraction of leg godt or "play well""”offers even the first time visitor an incredible sense of hygglige: amiable cosiness.

"I remember you mentioned in your book," my Danish editor said over lunch in Copenhagen two weeks ago, "that you had a big head." I do have a huge head. I took a bite of delicious Esrom cheese and nodded for her to continue, keeping one eye on the wienerbrÃ¸d.

"But you don’t have a huge head. You just have a healthy, normal-sized Danish head." I smiled"”home at last.

Even if you don’t have a Danish bloodline like I do, there are some good reasons to visit Copenhagen, the capital of the world’s happiest country

Here are just 6 of them:

English movies are almost never dubbed in Denmark. Combined with excellent free education, this results in a high % of Danes speaking more pleasant English than the average Brit or American.

"OK, I’ll see you for dinner at 6pm then," I said to one friend named Christopher over the phone. "You shall. Have a nice evening and see you soon," he responded. Did I just get out-Englished by a non-native speaker? I felt like a TOEFL student.

You’re more likely to have communication problems in the bayou of Louisiana or in a pub in Manchester than you are in Copenhagen.

In 1971, a 101-acre site formerly used for army barracks was effectively seized and converted by hippies into "The Free State of Christiania." They hotwired themselves into the power grid, created their own form of goverment, as well as a rich community of shops, schools, recycling programs, and most things you would associate with a normal township"”but they claimed sovereignty and paid no taxes. It became a haven for artists, alternatives, and soft drug dealing, among other things, and the Danish government"”though allowing Christiania to exist as a proclaimed "social experiment""”has been trying to shut them down for more than 35 years. In 1991, the appointed powers within the anarchist state agreed to pay rent and cover the costs of water and electricity.

I spent a late night wandering through the beautifully painted historical buildings of Christiania, ultimately ending up with two friends at The Woodstock Cafe, where we drank organic beer and met interesting vagabonds from all over the world. Dogs played outside among the metal barrels, which glowed like jack-o-lanterns from the flames inside them, producing surreal shadows on the graffiti all around us. It was incredible.

Most Danes agree that Christiania’s days are numbered. It’s an anachronism that has somehow survived every attempt to demolish it, but it’s nine lives will soon be up. Get there before it’s gone.

3. Danes pair food and wine better than most Italians or French.

That’s a strong statement, but I was amazed at how precisely, and insistently, most decent restaurants paired courses with wine. Restaurant Saa Hvidt, featuring young culinary superstar Frederik Hvidt, offers a prix fixe 5-course meal with five separate wines for each tapas-like dish. Incredible and unlike anything I’ve had in more than 30 other countries. Danish cheese is also the best I’ve ever had.

For a taste of real home-cooked Danish food, eat with a local family for about 400 DKK through the Dine with the Danes program.

4. The people are beautiful but seem unaware of the fact.

As Bill Bryson once observed: you could cast a Pepsi commercial here in 15 seconds.

Right up there with Argentina, Denmark has a jaw-dropping number of gorgeous people. The truly beautiful part, and unusual differentiator, is that appear blissfully unaware of the fact. There is little LA-style pretension unless you go to a social climber magnet like Club NASA, which helps to pull the mirror gazers off the streets. Go in the spring or summer and there is no need for catwalks"”the sidewalks at Nyhavn are good enough. For those feeling the club or lounge itch, Vega and JazzHouse are hard to beat.

5. Danish design is incredible to experience, even for non-designers.

"It doesn’t cost money to light a room correctly, but it does require culture." This quote from Poul Henningsen, encapsulates the beauty of Danish design minimalism. Much like in Japanese design, form follows function, and half of the time I found myself in a great mood in Copenhagen, I realized it was due to the planned passage of sunlight in Danish architecture, as well as their understanding of interior lighting intensity and placement.

Bigger is not better, as is so often the case in the US, and the tallest building in Copenhagen is a modest 358 feet.

From the sleek silverware of 2001: A Space Odyssey to the most famous chairs in the design world, the Danes have a functional and pleasant feast for the eyes almost anywhere you go, whether the renowned Louisiana museum or your hotel lobby.

6. Bite-sized goodness: public transportation is as good as Japan, and you can cover the entire city in a weekend.

I looked at where I wanted to go. It was on the other side of the map from my hotel. "How long does it take to get there by taxi? 20 minutes?" The receptionist looked at me and laughed: "10 minutes by bicycle." Copenhagen is probably the most hassle-free capital I’ve ever visited.

Rent a bike for 100 DKK and you can cover 1/2 of the "Barcelona of the North," as design god Sir Terence Conran calls it, in an afternoon. 1-3-hour bike tours from Central Station are a perfect first-day orientation. The numerous S-line and Metro stations, in addition to HUR buses, will get you where you want to go if self-propelled locomotion isn’t your gig, but the average Dane bicycles 375 miles per year. Get off your ass and join them for the real Danish experience.

Looking for other happy travels?

Here are the combined top 10 according to separate studies from the University of Leicester in the UK and Erasmus University in Rotterdam, the latter of which had 953 indicators (!):


4 thoughts on “6 Reasons to Visit the World’s Happiest Country: Denmark”