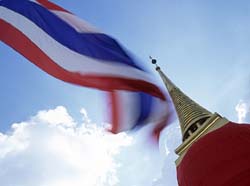 Here’s a little list I’ve compiled of things you should not do whilst in Thailand – please feel free to send in your comments or additions at the bottom!

1. Do not raise your voice or get angry with locals

It makes me incredibly uncomfortable to see foreigners (‘Farangs’) come to Thailand, and start ranting and raving aggressively at the locals. Thai people generally do not shout at each other or show anger – everything is done with a smile, however annoyed they are.

Reasons for this foreign aggression usually include: the fact that foreigners often expect all Thai people to be fluent in English, combined with the fact that things in Thailand do not happen at the same pace or with the same efficiency (or level of stress?) that they do in the West. If you’re easily wound up by people not understanding your machine-gun garbled English, and expect things to happen as and when you click your fingers, I’d suggest you headed somewhere else on holiday. (Be warned, beneath the smiley Thai demeanor lies a raging monster waiting to explode – and should you push them far enough, you will not know what hit you.)

2. Do not ride a motorbike without a helmet and/or whilst drunk

This is known colloquially as a “schoolboy error”. You’d be amazed at the amount of beer-swilling westerners who head to places like Koh Phangan, drink 10 pints of lager, smoke a few joints and, having not ridden a motorbike before, suddenly decide that they can navigate the twisty island roads at 3am with 2 passengers . You see them all the time, legs, arms and shoulders covered in festering scabs, and those are the lucky ones. Just because Thai people ride without helmets (after 20 years of motor-biking experience), and regularly spill their brains across the roads, it doesn’t mean you should.

3. Do not only eat western food

Honestly, if you order Steak Au Poivre in Thailand, it’s just not going to taste like back home. Try some of the local food, from the local restaurants – and that doesn’t mean the local Irish backpacking establishment. For you own good, I’d recommend eating in some of the local street restaurants. The food is generally cheaper (about $1 a meal or less), and more often than not, it is considerably fresher and tastier than the salmonella-riddled chicken in your backpacker guesthouse. Why? These people have cooked the same few dishes for years and years – they are specialists, and if the Thai people eat there, it is because the food is very, very tasty.

4. Do not expect things to happen “as they do at home”

They simply don’t. For example, ‘Thai time’ is a special time-telling system that operates along the lines of "I say 10 O’clock and I mean somewhere between 09.30 and 11.30 probably.". If this is going to bother you, either bring something to entertain you whilst you are waiting around, or, go to London/New York on holiday.

5. Do not get overly amorous in public

Thai people do not show affection in public in the same way that westerners are accustomed to doing. The most you’ll ever see them do is hold hands. If you like to fondle and kiss your partner in public (with or without tongues), bear in mind that the Thai people around you will probably feel quite uncomfortable.

6. Do not walk around semi-naked “because it’s bloody hot here”

It amazes me the amount of Western men I see walking around the Old City in Chiang Mai, with their tops off. Look around and ask yourself why Thai people don’t do this. The answer is not “because they are used to the heat”. By way of an illustration, Thai people wear their clothes whilst ‘swimming’ in the sea – however hot the weather is. This is for two main reasons: firstly, so their skin remains as light in tone as possible, and secondly, because they find nakedness a little bit embarrassing. That also means girls, sadly the boobs should stay covered.

7. Do not expect people to follow the same driving rules they do “at home”

I have taken my driving test in Thailand, and during the multiple-choice theory test, the computer spat out a series of unintelligible (and actually incorrect) answers. Pointing this out to the examiner resulted in "Ha! Ha! Computers in Bangkok wrong!" followed by some loud guffawing. Generally, people in Thailand do not drive in the ordered way we have come to expect in our home countries. Driving rules, if they exist, are there to be broken. Thai drivers also cannot drive backwards, which makes for interesting head-to-head stand-offs down narrow roads. I suggest you quickly adapt your usual driving style, and expect everyone to do the unexpected at all times. It’s your only chance!!

8. Do not speak negatively about the King

Thai people respect their King almost as if he were a god. If you intend to visit Thailand it would be a good idea if you learnt to do the same – even if only temporarily. That means not laughing out loud during the national anthem, or defacing posters of the king like this Swiss man did. At best you’ll be severely disliked, at worst you may be in for a public lynching.

It is a shame to visit such a beautifully diverse country and only spend your time hanging out with other Westerners in a backpacker ‘zone’ like Hadrin in Koh Phangan. Be adventurous, head off the beaten track – you won’t be disappointed, unless you’re secretly xenophobic that is.

10. Do not have unprotected sex with a stranger

It may be stating the obvious but you’d be surprised how many stories you hear of holiday makers coming out to Thailand and having unprotected sex. Generally speaking, ‘bar girls’ (as they are perhaps derogatorily known) are the only women in Thailand that would actually consider being ‘picked up’ by a drunken Farang (foreigner) for a one night stand – and whether you like it or not, they have probably done it ‘quite a few times’ before. There is a very high rate of HIV/AIDS in Thailand – be sensible. 😉

So there we have it – the 10 things you should avoid doing in Thailand. If you have any additions please feel free to add them below as a comment…